During any visit to Pigeon Forge, you’ll want to be sure to make time in your schedule to see the show continually voted best show in Pigeon Forge – Country Tonite – as it enters its 20th spectacular season! From start to finish, Country Tonite features the best of the best from the performance industry including singers, dancers and musicians of every age. You won’t want to miss it as they ramp up the experience this season with brand new choreography and costumes that are sure to leave you satisfied with your choice to attend.

Musical Selections for All Ages

Don’t let the name “country” fool you. Our show offers a full range of musical genres including classic country favorites, gospel selections, modern hits and patriotic tunes. A truly family friendly show, there is something for everyone at Country Tonite! New this season, Country Tonite will offer an upbeat show with clean-cut comedy and live entertainers that will perform music from the 50s, 60s, 70s and 80s. If you enjoy a little “Rock Around the Clock” or “Raindrops Keep Falling on My Head,” then you’ll love this wonderful addition to Country Tonite’s already diverse seasonal show set that sets it above the rest as the best show in Pigeon Forge. Check out the show schedule linked below for American Oldies show dates and times.

Not only does Country Tonight produce its own dynamite show, but they also partner with First Class Productions to bring some of the biggest names in the country music industry to Pigeon Forge for intimate, one or two night only performances. This season will feature Loretta Lynn, The Oak Ridge Boys, T.G. Sheppard & T. Graham Brown, Neal McCoy, Con Hunley & Janie Fricke, Bill Anderson & Bobby Bare, Brenda Lee & Jimmy Fortune, and The Bellamy Brothers. If classic country is what you love then you won’t want to miss these special artists!

For more information about the upcoming celebrity concerts, click here. 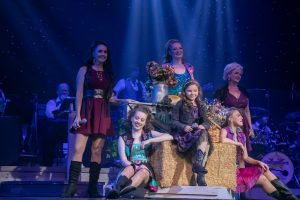 Since Country Tonite has been chosen as the best show in Pigeon Forge time and time again, our 1500 seat, state-of-the-art auditorium fills up quickly on show nights, so make sure to purchase your tickets early! Ticket prices are $32.50 for adults, a special teen rate of $22.50 and children 12 & under are free with the purchase of an adult ticket. We are also currently offering a $5 discount for purchasing tickets online. Group rates are available for groups of 20 or more, as well as special group meal packages.

Have you seen our show in the past and can’t wait to see what’s new for 2016? Comment below and let us know what you’re most excited about!