1. Pigeon Forge TN is within a day’s drive of two-thirds of the country’s population. Sevier County is a premier destination for about two thirds of the United States. This area of Tennessee is within a 24-hour drive for many people, making it easy to get to and not very far away. A lot of people don’t want to travel by plane or can’t afford to, so a destination that’s easy to drive to is a great option!

3. The Old Mill used to provide electricity to Pigeon Forge. 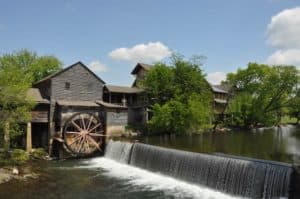 The Old Mill is full of history and all kinds of interesting facts. One of the most interesting is that the grist mill was used to provide electricity to the city of Pigeon Forge in the 1930s until electricity was brought to the city through Sevierville. In addition to providing electricity to Pigeon Forge, the Old Mill also contributed to the naming of the city, was used in the Civil War for multiple things, and has been many other businesses other than a grist mill.

4. There are only about 6,000 permanent residents.

There are millions of visitors that come to Pigeon Forge every year. It’s interesting though, because there are about 6,000 permanent residents in the city. Many people work in the city, but there are several locals who live in surrounding cities that come and work in Pigeon Forge to help accommodate all of the tourists who come to the area.

5. The trolley system was implemented to combat traffic. Tourism kept growing in the Pigeon Forge TN area, so the roads were eventually expanded to accommodate more and more people coming in. To accommodate heavy flow of traffic, a trolley system was put in place in the 1980s. You can still use the trolley system today for just a few dollars for each ride or an all-day pass. The trolleys will take you all over Pigeon Forge and even into Sevierville and Gatlinburg.

6. An elephant from a zoo would escape and play in the river.

Around the 1930s to 1950s, there was an exotic zoo in Pigeon Forge known as Fort Wear Game Park. They have all kinds of animals, including an elephant. This elephant would somehow escape the zoo and play in the river nearby. Apparently Pigeon Forge Elementary School was close to the zoo, because students would watch the elephant from the windows play in the water!

There is probably so much you don’t know about Pigeon Forge TN! You also may not know much about our country music show. Read more about our show in Pigeon Forge and then purchase your tickets!

5 Things Guests Love About Our Celebrity Country Music Shows in Pigeon Forg...
The Country Tonite Show is Open! CLICK HERE to view the enhanced health & safety measures we have taken for you, our other guests, staff and cast members. All guests are required to wear a face mask to our show. If you have any questions, please call the theatre directly at 865-453-2003. We look forward to seeing you!
+
Scroll to top