We were lucky enough to have one of our former cast members visit us recently! Country music star Carly Pearce spent her bachelorette weekend in the Smoky Mountains, and she decided to stop by to see the show! Learn all about her time in the Smokies and her history at Country Tonite below:

During her bachelorette weekend, Pearce decided to come back to the place that helped kick-start her career: Country Tonite Theatre. We always loved when Pearce was on stage, and this time we were honored to have her in the audience for one of our performances! The country music singer started performing at Dollywood when she was 16, then after about a year joined us at Country Tonite. Pearce has always had such wonderful things to say about her time as one of our cast members. In her exclusive with People Magazine, she described being back at Country Tonite as a “full-circle moment.”

Pearce also said one of her highlights was seeing “Every Little Thing” was performed during our show!

Pearce is now married to country star Michael Ray. Before the wedding, Pearce and her friends celebrated in the Smoky Mountains! In addition to their night at our theater, the group of girls spent the day at Dollywood and stayed in a Gatlinburg cabin. Her first job in Pigeon Forge was actually in the Country Crossroads show at Dollywood! They took a trip down memory lane and went to see that show as well, and of course they enjoyed food and rides at the theme park too. The girls stayed in a beautiful Gatlinburg cabin that was fully decorated for a fun bachelorette party!

We want to wish Carly Pearce a big congratulations on her marriage and are so happy she was able to come back and visit for a night!

About the Country Tonite Show 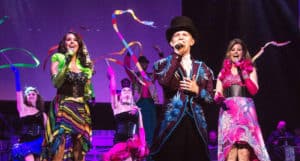 Our Country Tonite show has won many awards and continues to wow visitors year after year. We aren’t your typical country music show! Our performance includes singing, dancing, comedy, gospel, American patriotism, and so much more. For 2 hours, you’ll be amazed as you watch and sing along with our talented cast. What sets us apart from other shows in the area is that we have youth performers! That makes it even more fun for the whole family to enjoy. You don’t even have to be a fan of country music to be a fan of this show.

During November and December, join us for a special Christmas show! Our Pigeon Forge Christmas Show features a number of all your favorite holiday classics, as well as a few special guest performers — including Santa Claus himself! It’s a heartwarming presentation that will get everyone into the holiday spirit.

Get Your Country Tonite Tickets

If you want to see one of the places where country music superstar Carly Pearce got her start, join us for an evening at Country Tonite. Get your Country Tonite tickets and enjoy the show!