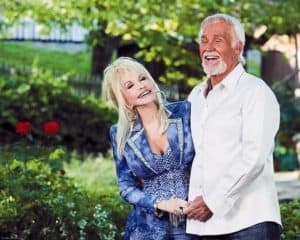 Country megastar Dolly Parton has won 7 Grammy Awards…and she might be getting another! Parton’s newest duet with the legendary Kenny Rogers was just nominated for a Grammy in the “Best Country Group/Duo Performance” category. Aptly titled “You Can’t Make Old Friends,” this beautiful song celebrates the 30 year long friendship between Parton and Rogers.

Dolly Parton’s roots run deep in East Tennessee. Born and raised in Sevierville, Dolly lived minutes away from the present day site of the Country Tonite Theatre. Parton’s childhood was far from glamorous; she lived with her parents and 11 siblings in a one room cabin in the Smoky Mountains. Despite difficult circumstances, Dolly started performing on local radio and television programs and eventually moved to Nashville to launch a career that has spanned 50 years.

After hitting it big, Dolly has done a tremendous amount to help her hometown. Dollywood, Parton’s personal theme park, brings millions of visitors to the Smoky Mountains to enjoy fantastic Pigeon Forge entertainment. Dolly has also promoted literacy in Sevier County and around the world with her “Imagination Library”, a program that mails monthly books to enrolled children from the time of birth until they enter kindergarten.

“You Can’t Make Old Friends” is the third Grammy nomination for Parton and Rogers, but none of their previous collaborations have clinched the award. Do you think 2014 could finally be their year?

The Country Tonite team wishes Dolly and Kenny the best of luck at the Grammys! We share Dolly’s commitment to quality Pigeon Forge entertainment. Country Tonite was voted the Best Show in the Smokies in 2013, and like Dolly, we also hope to be a winner in the new year. With feel-good country music, dynamic dancing and hilarious comedy, our show has something for everyone. Visit our Show page to learn more about this one of a kind performance!